Where is Lake Jackson?

Located in northern Leon County Florida, the lake is bounded on the west by US 27 and on the east by Meridian Road (SR 155). On the southern shore is Lakeshore Drive, with Old Bainbridge and Miller Landing roads on the northern side. The lake is some 6 miles due north of the Florida Capitol in Tallahassee.

How big is it?

Lake Jackson covers from 6-7 square miles of surface water, depending on the lake level fluctuations due to rainfall and dry weather.

The lake has a 43 square mile watershed surrounding its shoreline and this feature comprises a closed basin system without any surface outlet stream – thus it is entirely dependent on rainfall, along with several small streams.

Why does it go dry every now and then? Want to learn more?

Scientists say there are several sinkholes out in the body of the lake that feed into limestone caverns, and ultimately flow into the Floridan Aquifer, which underlies all of Florida. When drought conditions exist, and upon certain water levels, the lake will drain into this part of the aquifer. It has a long history of doing this and it always comes back once the rains resume. Native Americans even called the lake “Okeeheepkee,” meaning Disappearing Waters, according to early explorers.

What was the cause for the pollution in the lake during the 1980’s?

Stormwater runoff from around the watershed basin, washing polluting materials from roads, yards, parking lots, and construction sites into the lake.

What is its status now?

After considerable effort and expense by local government and water management officials, mud, silt, and other sediments were removed from the lake bottom and its water quality is now recovering quite well. Read more on dry downs

Why is this important?

Lake Jackson is an “Outstanding Florida Water” and is the only freshwater lake that is an aquatic preserve in Florida. It is the principal recreational lake in Leon County, is a world renowned bass fishing spot and a source for water sports to the entire Tallahassee area. This brings in visitors and dollars to our local economy.

To see more about the hydrogeology of Lake Jackson, Click here
This is a PDF file that has been converted to run on the web – click on the slide advance in the arrow to advance the presentation:

What is all of that stuff the looks like grass in the lake?

Very likely you are seeing Alligator Weed, which is an aquatic invasive plant from South America. Also, almong the ponds and shallow parts of the southern shoreline, there are thick infestations of Duckweed, Azola and some Hydrilla. See more on Aquatic and Terrestrial (land-based) Invasive Plants

What is Friends of Lake Jackson?

What is its purpose of the Friends of Lake Jackson?

To preserve, enhance and maintain the waters of Lake Jackson and its surrounding and supporting watershed. 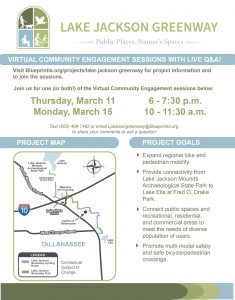